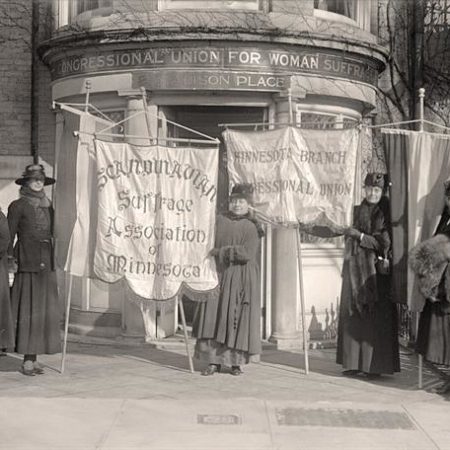 Related Programs around the "Persistence" Exhibition

The Ramsey County Historical Society, along with our partners, have created a series of events and History Revealed programs around the Persistence: Continuing the Struggle for Suffrage and Equality, 1848-2020 exhibition. For Upcoming Programs, see the main RCHS webapage. Recordings of past programs are available on our YouTube channel, listed below.

History Revealed: Hope in the Struggle
With Dr. Josie Johnson and Tish Jones
February 23, 2021
In partnership with the East Side Freedom Library
How did a Black woman from Texas become one of the most well-known civil right activists in Minnesota? After seven decades of speaking up and standing up, of fighting for fairness in voting, housing, education, and employment, Dr. Josie Johnson has finally written her memoir. Hope in the Struggle gives us an opportunity to not only learn about her, but to learn from her.
YouTube video recording

The Art and History of the Persistence Exhibition
With RCHS Curator Mollie Spillman; and historian and exhibition consultant Dr. Bobbie Scott; artists Hannah Boehme, Daniel Brevick, Stephanie Kiihn, Klaire Lockheart, Anika Schneider, Lesley Walton, Sadie Ward, Hilary Woods and Mary Younkin.
February 18, 2021
In partnership with the Roseville Library
A panel discussion with the artists and historian Bobbie Scott to explore the making of the exhibition, including creating the original artwork and the research that went into presenting the histories of each of the featured suffragists in the exhibition.
YouTube video recording

History Revealed: Turnout, Making Minnesota the State That Votes
with Joan Anderson Growe and Lori Sturdevant
December 3, 2020
In partnership with the East Side Freedom Library
In “Turnout,” the architect and chief promoter of Minnesota’s high voter turnout tells her story, showing how hard work and cooperation made the state a leader in clean, open elections. High voter turnout in Minnesota is no accident. It arose from the traditions of this state’s early Yankee and northern European immigrants, and it has been sustained by wisely chosen election policies. Many of these policies were designed and implemented during the twenty-four-year tenure of Minnesota secretary of state Joan Anderson Growe.
YouTube video recording

History Revealed: Democracy on Hold, Minnesota during the Great War
With Greg Gaut
November 11, 2020
In partnership with the East Side Freedom Library
When thousands of Minnesotans went to Europe to “make the world safe for democracy” in World War I, the legislature created the Minnesota Commission of Public Safety. Led by John McGee, it crushed any form of dissent, labor organizing, or German cultural expression. McGee organized the Home Guard as the commission’s main enforcement arm. Home Guard units helped defeat a Twin Cities transit workers strike, conducted mass arrests of young men to check draft status (“slacker raids”), and more. Minnesota’s home front experience reminds us how fragile civil liberties and the rule of law are in periods of great polarization.
YouTube video recording

History Revealed: Women’s Suffrage in Minnesota
With Kate Roberts
October 22, 2021
In partnership with the Roseville Library
Kate Roberts, Senior Exhibit Designer at the Minnesota Historical Society, share some of the history of suffrage and suffragists in Minnesota, many of whom have previously been overlooked.
YouTube video recording

History Revealed: Suffrage at 100
With Stacie Taranto and Leandra Zarnow
October 1, 2020
In partnership with the East Side Freedom Library
Editors Stacie Taranto and Leandra Zarnow talk about their collaboration on their new book, Suffrage at 100: Women in American Politics Since 1920 and share some of the history and stories of women who have stepped into politics at many levels since the 19th Amendment passed.
YouTube video recording