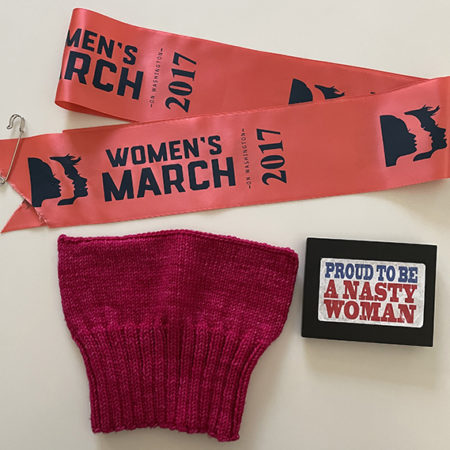 Memories of the 2017 Women's March

RCHS member Judy Kishel participated in the Women’s March on Washington in 2017. Hundreds of thousands of women all over the country marched for equal rights, and thousands more traveled to Washington D. C. to participate in the march on the U.S. Capitol. Judy Kishel shares her memories and photos from that eventful day in Washington D.C.

President Ruth was very kind to invite me to share my experience about my participation in the Women’s March in Washington D.C. on Saturday, January 21, 2017. I am proud to provide this living history.

Up until ten days before the Women’s March, this, for me, a truly transformative event, was not even on my radar screen. I have never been a marcher or demonstrator but, I do have an identical twin sister who has been.  When we were freshmen at the University of Minnesota, almost 50 years ago, Joanie skipped classes to protest the war in Viet Nam and she even scored second row seats in Northrup Auditorium to see Paul Newman speak out against the war. I didn’t know what impressed me the most. That she skipped classes OR that she participated in an anti-war demonstration OR that she got to see Paul Newman from the second row.

Joanie, who now lives in Philadelphia, called and said NOW is the time to get out of my funk NOW is the time to act on my great disappointment over the election results and my growing fears about the incoming administration. And so, I said “yes”, cleared my calendar and flew into Philadelphia. Our brother, David, drove in from Pittsburgh to join us. He wanted to make sure that someone would bail out his two older 67-year old sisters, just in case they landed in the slammer.

On the morning of the March, we got up at 4:30 AM, left the house at 5:15 to drive to a shopping center in Easttown, PA where we were to catch one of two buses hired by the Chester County Women’s March on Washington. We were scheduled to leave at 6:00. The buses did not arrive until 7:00. This was the first oh-oh of the day. In that hour, though, we had an opportunity to admire other people’s signs and discuss their causes. I welcomed the opportunity to speak with others of like mind. Just before boarding, we were issued an orange 2017 Women’s March on Washington D.C. sash and a sticker that said “Proud to be a Nasty Woman”.  FYI: It has been confirmed that the Smithsonian has acquired a sash for their archives. Also, on our bus was the Assistant Executive Director of the Delaware Historical Society and she has submitted her sash and a sticker to her historical society.

Finally, we boarded the bus at 7:00 with 56 people on each bus, and it started to rain (oh-oh #2 because we didn’t have any rain gear). One hour into our 2½ hour bus ride, we stopped for 45 minutes to change bus drivers (oh-oh #3). Never, did anyone get upset, though. Really, the talking never stopped. Behind us sat a woman who was an educator, married to a physician. She was with her daughter who was a Physician’s Assistant who worked in her father’s office. Across the aisle from us was another set of twins. This was a reoccurring theme, families, often multi-generational were marching. Also on our bus was a documentary filmmaker and she took our photos and interviewed us for her film. We then were told that we could not park at RFK Stadium as planned (oh-oh #4) because the lots were full and we needed to be detoured to another place to park. We were sent to a Park and Ride lot in Landover, Maryland. As we debarked, we were given energy bars and a bottle of water and miraculously, the rain stopped.

We then had to line up to purchase our Metro cards and there were only 2 machines for what seemed like thousands of marchers (oh-oh #5). One hour and 40 minutes later we had Metro cards in hand. It was now past 11:00 AM, the program started at 10:00 AM and we weren’t even close. Because the Metros were so full, three full trains passed us by without stopping (oh-oh #6) but, the chanting started and everyone was very energized. We boarded the 4th Metro at 11:30. We exited at the L’Enfant Station. The station was so packed, it took over an hour to just get out of the station (oh-oh #7). FYI: I am not a good oh-oh person but, on this day, I was a good oh-oh person, as was every other Marcher.

We finally got out of the station and immediately our phones died (oh-oh #8) but, on the bus we had been instructed to use Fire Chat, texting without using the internet. It uses your phone line. We contacted my husband’s niece who lives in DC and is a VP for a defense contractor. We cannot tell her boss that she marched with us. Finally, we met up with Minda. It was now 1:00. It has now been over eight and a half hours since we got up and we haven’t seen the Capitol Mall yet. We just started walking down Constitution Avenue and got swept up by the momentum, the chanting, the signs, the diversity of ethnicities, the diversity of causes and of, course the sea of pink hats. You could not take a full stride. It was like we were back in the Metro station, shuffling along because there are so many people. We entered the Capitol Mall near the Washington Monument, the furthest point that you can get from the Capitol but, it didn’t matter. The speeches and program were over hours ago, yet, people were still standing in their places. The wave of marchers that we were with weaved in and out of the Mall via the cross streets. Our brother wore his Fit Bit reported that we logged more than 17,000 steps but, it didn’t seem like it. We saw no celebrities or any part of the scheduled program but, we saw and heard so much more. It was oh-so peaceful and people were oh-so kind to each other. There was no pushing or shoving. Even the chanting was civil. There was a chant for Black Lives Matter. And, after that chant ran its course, a group of young black women ahead of us started chanting “All Lives Matter”. The most often repeated chant was “This is what democracy looks like.” A close second was, Hey-hey, Ho-Ho, Donald Trump has got to go!” The signs were riveting, showing support for Planned Parenthood, women’s rights, human rights, LBGT rights, the Affordable Care Act, public education, clean air, clean water, Immigration reform, the NEA, anti NRA, gun control and even a third term for Barack Obama. Some were very clever. Like: “Ikea builds better cabinets than Trump” and “I can’t believe that I’m still protesting this same old shit.” And, there were hundreds of take-offs on what the pink hats represented. Some clever, some profane, all had something to say.

We marched until 4:30 when we made our way back to a packed Metro and for our return trip. I expected tired and weary people. No, they were as energized as ever and there was a buzz of new resolve and action plans. As we boarded the bus for the 2½ ride back to Easton, it started raining again. Everyone excitedly told what they had witnessed and connections that they made but, within an hour, the bus was pretty quiet. The day had caught up with us. We debarked at 8:30 and for the first time, Joanie, David and I realized that we hadn’t eaten all day except for the energy bar. But, we were nourished in so many other ways mentally, intellectually, emotionally and even spiritually. We rushed home to watch all the news channels over pizza and wildly cheered when we saw that 90-100,000 people marched in Saint Paul. We were so proud of our hometown!

Since that day, the Chester County Women’s March on Washington DC has become Chester County Women Marching Forward. Their numbers have grown and I get daily emails about their upcoming action plans and events. I said earlier that this event transformed me. I have always considered myself to be a woman of action but, this event has caused me to consider options for action that I have never even considered. And now, I am energized!

A few days prior to the March, I was sent a Blessing for the Women’s March that I would like to share with you today. It was written by Rev. Ericka Hewitt. (See below).

I was blessed tenfold that day. I’m really glad and grateful that my sister made me do it.

May you encounter strangers-as-kindred,
and may that recognition of kinship bring joy to your journey.

Whether the faces in the crowd number in the dozens, hundreds, or thousands,
may you not only recognize yourself,
but may you also witness a dazzling tapestry and humbling display of our human family.

May the crowds be gentle, friendly, and patient.
May you offer quiet praise for gestures of kindness.
May all bodies — vessels of spirit and soul — be treated as the gift that they are.
May the sturdiest of marchers make space for those who need more time,
more help, or a different means of moving.

May those bearing snacks share generously with others.
May you fuel yourself wisely, and hydrate.
In your hour of need, may you easily find a restroom.

Amid the heady flurry of selfies and hashtags,
may you remember the commitment that led you there,
and what will be required for the road ahead.

Gather it all up, blessed one; let it feed you.
Allow the crowds’ electric thrum to seep into you,
knitting itself into courage;
into holy boldness;
into fuel for the journey back, and for the journey forward. 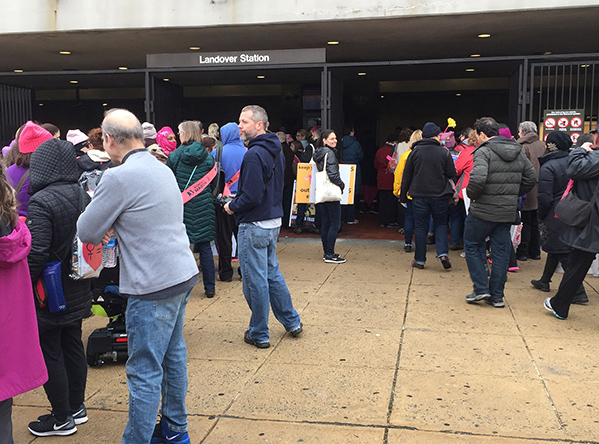 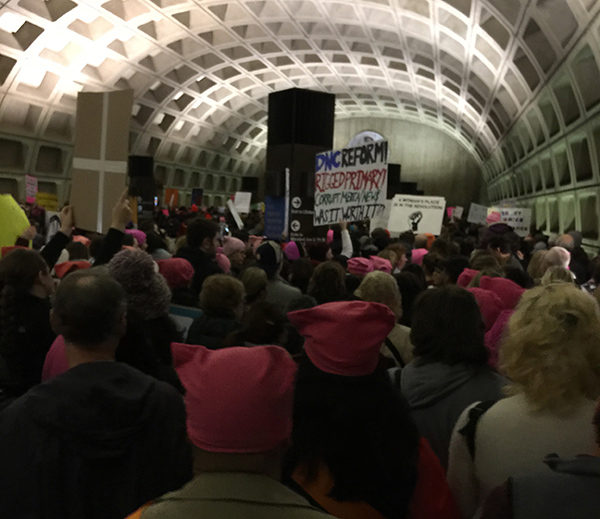 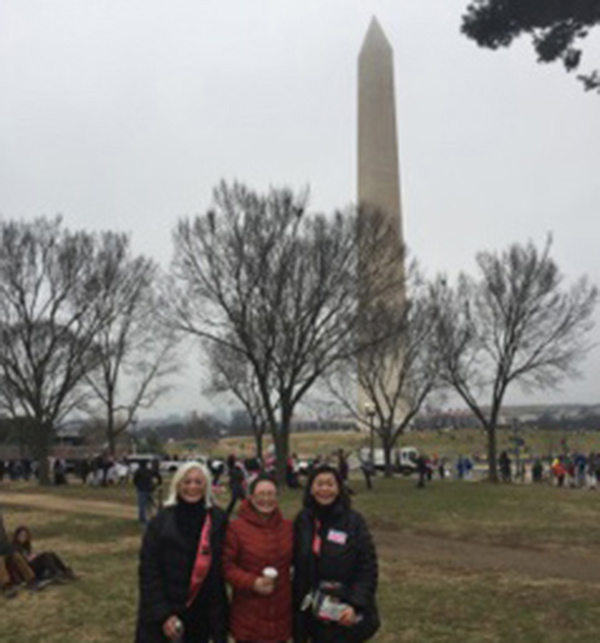 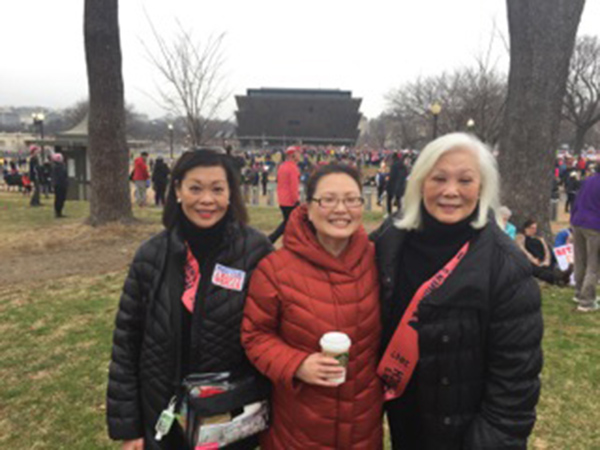 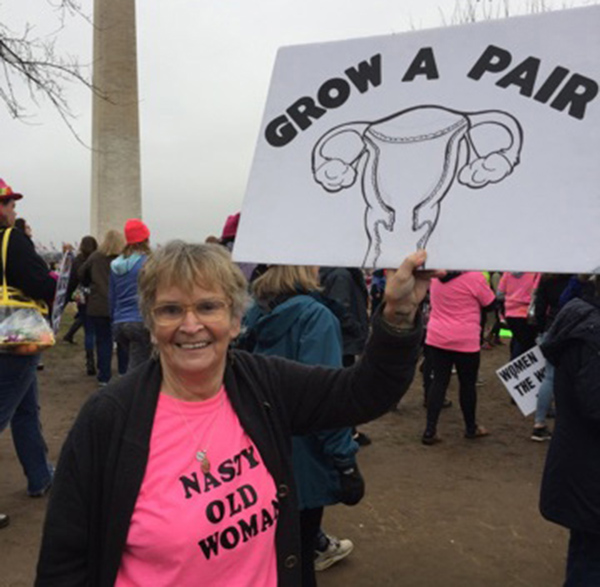 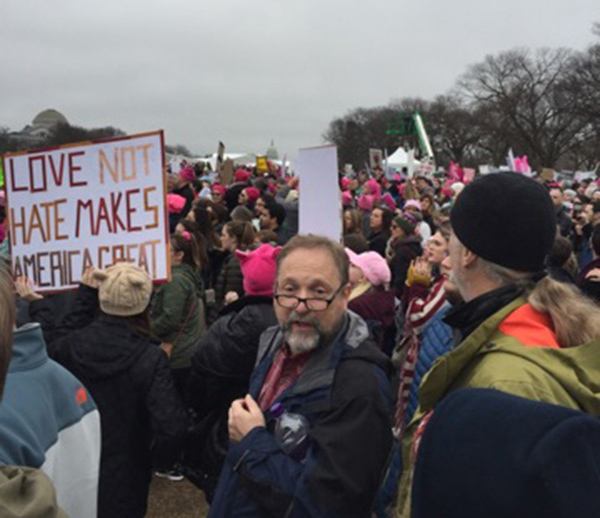 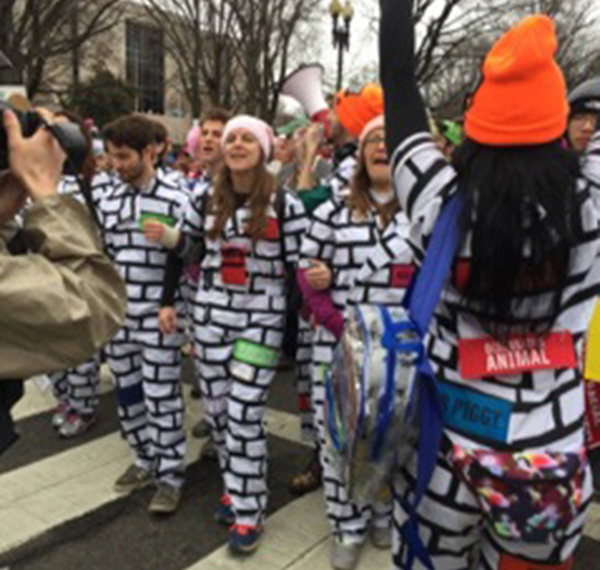 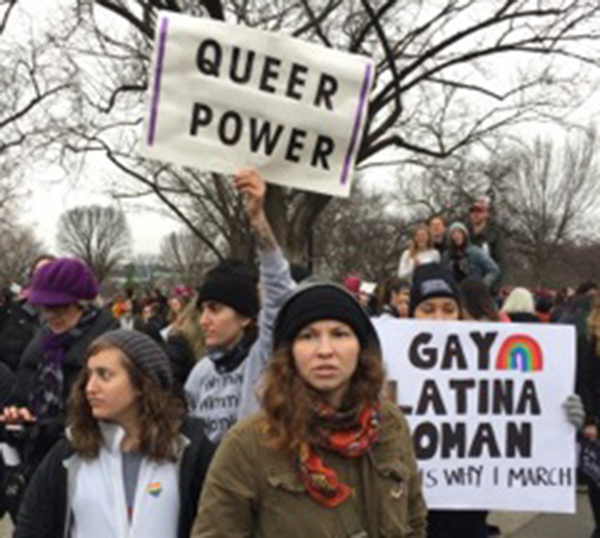 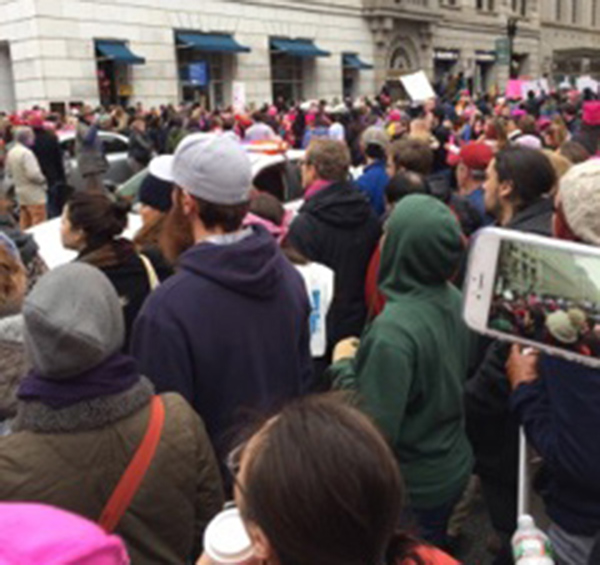 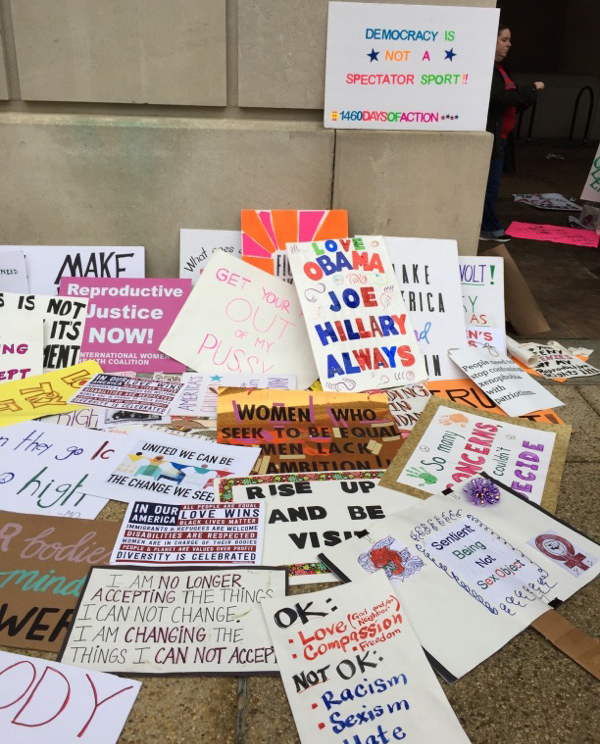 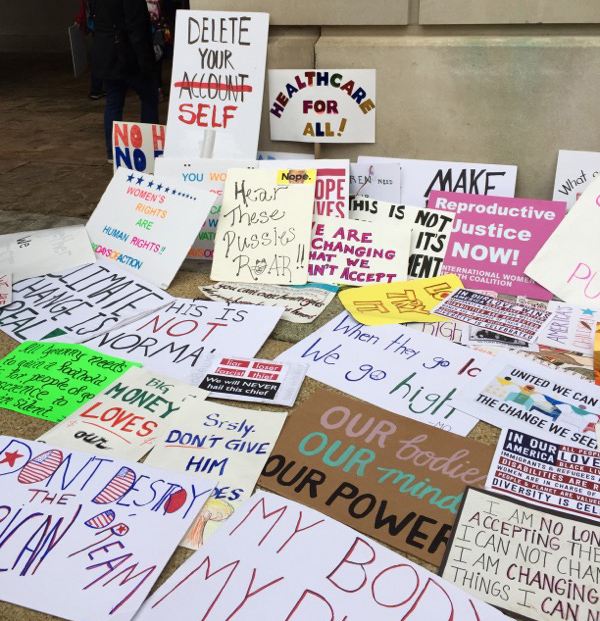