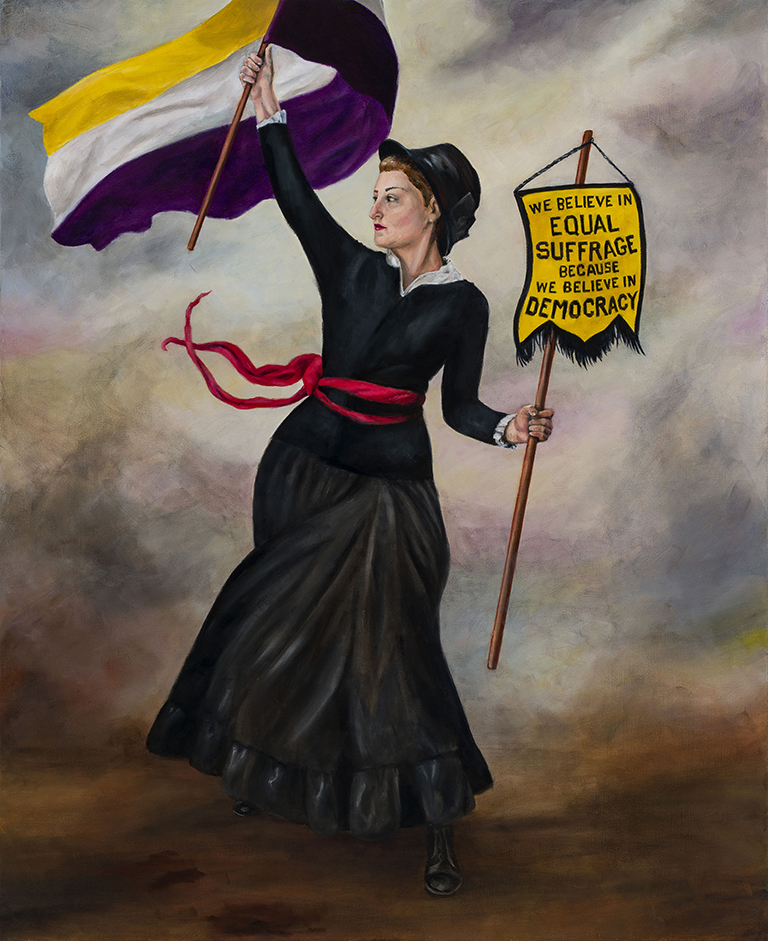 In many museums and government buildings, women are glaringly absent. The only time I ever see women is when they are included in the art or decorations as allegories for justice, liberty, or democracy. Traditionally, no actual women are represented. The women who shaped our history are missing. To correct this error, I deliberately chose to re-appropriate these historic poses of allegories and put influential women in their place.

This is portrait is a double act of defiance since not only are real women absent from dramatic history paintings, women artists were prohibited from creating them.

This oil on canvas painting represents Theresa Peyton as Liberty Leading the People; however, I represented Peyton with dignity in her contemporary clothing. Peyton was a teacher, lawyer, the Corresponding Secretary for St. Paul’s Political Equality Club, and she was part of the Minnesota Woman Suffrage Association. Because of her tenacity and support of women, I depicted her holding a banner from the St. Paul Equality Club and the Suffragist Flag. This is portrait is a double act of defiance since not only are real women absent from dramatic history paintings, women artists were prohibited from creating them.

Klaire A. Lockheart is a feisty artist who uses traditional oil painting techniques to critique historical injustices in the traditional Western art world. She has lived in South Dakota since she earned her MFA from the University of South Dakota, and she is currently the Artist in Residence at the Vermillion Area Arts Council. Lockheart enjoys using the human form as a vehicle to communicate the agency of her subjects with viewers, especially since women artists were historically prohibited from studying live models and making historic paintings. In addition to addressing femininity and feminism within her artwork, Lockheart enjoys incorporating humor to make serious subjects approachable. She also enjoys celebrating the accomplishments of women, and she is the South Dakota artist for the national Her Flag collaborative artwork. Her recent solo exhibitions include Feminine Attempts at the Sioux City Art Center in Sioux City, IA; A is for Apron at the Ritz Gallery in Brookings, SD; and Ladylike Representations at Gallery 120 in Inver Grove Heights, MN.

Theresa Peyton was active in the Minnesota Women’s Suffrage Association.

Klaire Lockheart’s 2nd video on working on her portrait of Theresa Peyton.