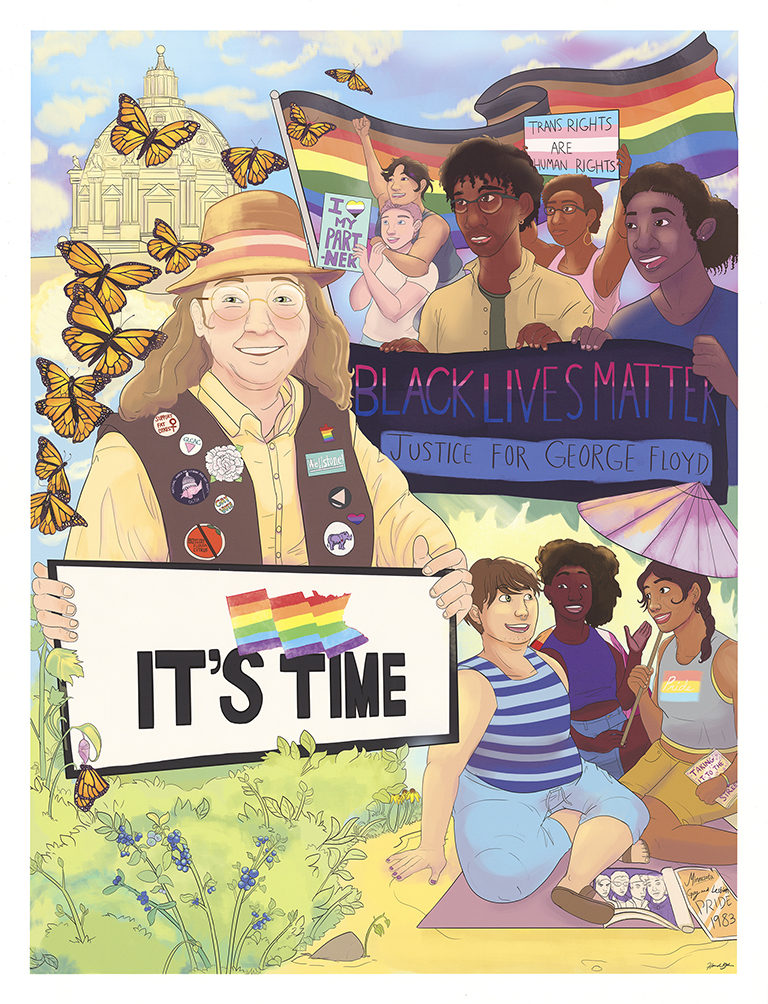 This piece is dedicated in equal parts to 80s LGBT activist Barbara Jean Metzger and to the queer youths (primarily people of color) who carry her work forward today. Barbara Jean, or BJ as she preferred to be called, was heavily involved in the Minnesota gay community from the 70s through the late 90s. She helped form the DFL Lesbian and Gay Caucus of Minnesota, worked on multiple grassroots campaigns, and volunteered at an extraordinary number of LGBTQ publications and organizations throughout the Twin Cities. She supported many feminist organizations in the Cities as well, working with groups like Planned Parenthood on women’s rights issues. She was also passionate about environmental causes, and helped organize local recycling projects. BJ was absolutely fearless in the face of uncertainty. She, along with her partner DJ Munro, was imperative to the progression of the rights of LGBTQ people in Minnesota.

For this piece I wanted to show Barbara Jean Metzger as part of a whole, and how she has contributed to shaping the fight for LGBTQ rights as we know it today.

I would like to acknowledge that although the Lesbian and Gay communities in the Twin Cities during the 70s-90s were incredibly important for many, they were also exclusionary. BJ herself supported the inclusion of trans and bisexual individuals in the community, but many did not. Additionally, transgender rights and the equal representation of people of color often took a back seat in the organizations of the time, leading to a predominantly limited (i.e.white) core group at the heart of the movement in Minnesota.

For this piece I wanted to show Barbara Jean Metzger as part of a whole, and how she has contributed to shaping the fight for LGBTQ rights as we know it today. I wanted to focus on the interconnectedness that is at the core of today’s protesting. The recent Black Lives Matter protests are a huge part of what helped drive this piece in its final stages. It was very important to me here that I gave LGBTQ people of color the recognition they deserve as they fight on the front lines for change and social justice. I hope I am successful in honoring both their struggle and the significant activist work of BJ Metzger.

As far as the artwork itself goes, I wanted to experiment with texture and brush strokes, while utilizing bright colors that reflect the palettes of various LGBTQ flags. I also enjoyed focusing on small details and repeating patterns because it adds a sense of movement and rhythm to the piece.

So in summary, Black Lives Matter! Convict officers Derek Chauvin, Tou Thao, Thomas Lane and J.Kueng! Justice for George Floyd and the people who loved him!

Hannah Boehme is a queer St. Paul-based illustrator and character designer. Her work focuses on colorful storytelling, social justice, positive queer relationships and small moments of warmth shared between people. She is an MCAD alumnus as well as a big history nerd, and she loves diving headfirst into research-based projects for inspiration. She can be found year round at local art and comic conventions in the Twin Cities.

Learn more about B.J. (Barbara Jean) Metzger and her work as an activist.