Suffragists came from many different backgrounds. Many were working class women with jobs in factories and stores. Some were from ethnic and racial minority groups. Some lived in small towns or on farms. Some were career women—doctors, lawyers, teachers, reporters. Others were middle or upper middle-class women who did not work outside the home but who had useful connections, as well as the time and resources to devote to the cause.

While most of the suffrage work in Minnesota focused on the Twin Cities, there were small suffrage clubs throughout the state, from Duluth and Rochester to Pipestone and Pine Island. Still, the MWSA had limited resources, and it was hard for them to reach all corners of Minnesota. In the final push for ratification of the Nineteenth Amendment, organizers visited communities where the people had never learned about women suffrage.

By 1913, the fight for woman suffrage had been going on for decades. Women had full voting rights in some states in the West. But in others like Minnesota, they could only vote in school and library board elections. 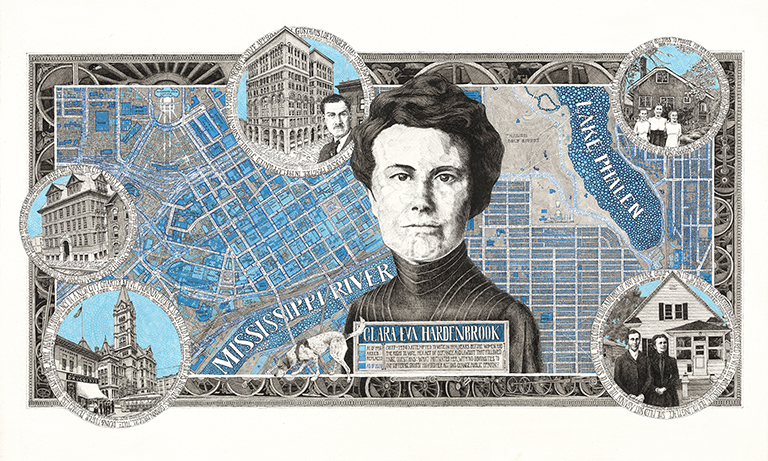 Clara Hardenbrook (1877-1936) was a working-class woman who lived with her family on the East Side of St. Paul. Since 1875, women in Minnesota had been eligible to vote in school board elections, and a new city charter was going to affect the way St. Paul schools were governed. Hardenbrook registered to vote as C. E. Hardenbrook, but when she tried to vote on May 7, 1914, she was turned away from the polls. The case went all the way to the Minnesota Supreme Court, which issued a decision against the activist in December 1914. After her court case, Hardenbrook returned to her working-class life.

Hardenbrook registered to vote as C. E. Hardenbrook, but when she tried to vote on May 7, 1914, she was turned away.

Stefanie Kiihn talks about her art and her portrait of Clara Eva Hardenbrook in this video.