Starting in January 1917, women from the NWP picketed the White House almost daily. They stood as “silent sentinels” holding banners. The NWP wanted to highlight what they saw as President Wilson’s hypocrisy. He was fighting for democracy abroad when millions of women at home could not vote. Picketing the White House was very controversial, especially after the United States entered World War I in April 1917. Many Americans thought picketing was unpatriotic. Picketing women were often attacked by soldiers or other onlookers.

In the beginning, the picketers were tolerated, then they got arrested on the charge of obstructing traffic. At first, charges were dismissed, or the jail terms were short. Some jailed women used hunger strikes to protest their heavy punishment and poor treatment. In response, some authorities force-fed some of the women. This drew attention and bad publicity to the situation. That fall, Congress began to move toward voting on a federal amendment, which President Wilson endorsed in January 1918, the day before the House was to vote on it. It passed with the two-thirds majority needed. Many of those in favor of it were from western states. They felt pressure from women in their home states who already had the vote. 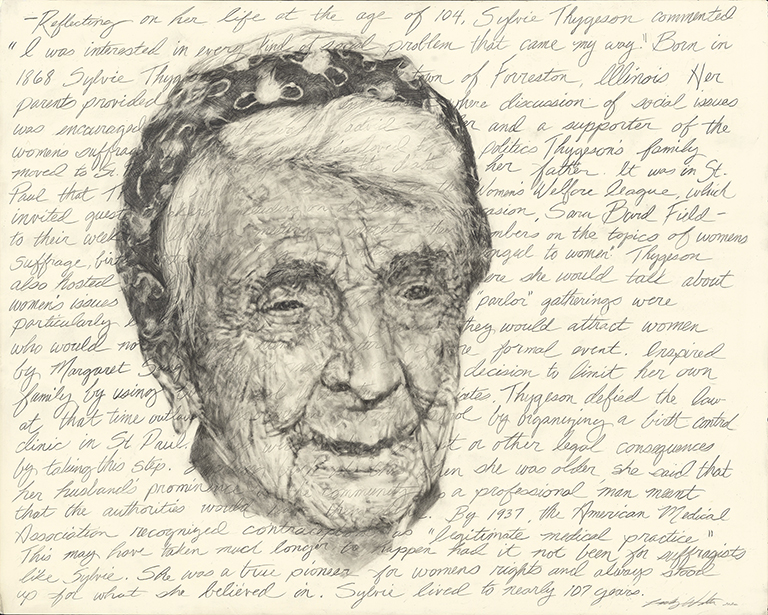 Sylvie Thygeson (1868-1975) came to suffrage through the Woman’s Welfare League, an organization founded in St. Paul in 1912. She was also involved with an early, and illegal, birth control clinic. A lot of her suffrage work happened in small groups, which was also important in building support for the cause. As a member of the Welfare League, Thygeson found her niche talking to women at neighborhood teas.

She saw her work as educating people about suffrage, one-on-one.

Thygeson was the president of the Minnesota Birth Control League in 1916. At that time, it was illegal to share or even possess information about birth control. She and two friends, Alice Bacon and Grace Keller, established a birth control clinic in St. Paul. Looking back on this at age 104, she said that their husbands’ prominence in the community as professional men meant that the authorities would leave them alone.